I have some news percolating out there, but I'm not quite ready to announce it just yet. I know, I know...ohh, mysterious. In the meantime, enjoy some funnies:

This one is from YouTube. Warning: lots of naughty words. Not suitable for work. Or, at least, turn it down and hope your boss doesn't walk by.
No offense to my Snuggie-loving friends.
Posted by WendyCinNYC at 8:10 AM 12 comments:

It dawned on me today that I'll be stuffing myself into a swimsuit in three weeks. Oh crap. I've spent the better part of the winter growing increasingly pale and doughy by making up excuses why I can't work out. My favorite? It's too cold to walk nine blocks and it's just wrong to take a cab to the gym. Better to sit on my ass, I guess.
What sparked my memory about the swimsuit is the fact that I could barely get my jeans up over my hips this morning. Normally, I'm pretty okay with my body. But today's screaming zipper has caused me to reconsider my I'm-happy-just-being-me outlook. I'm happy to be me in my favorite jeans, not my seriously out of fashion roomy pair. I'm decidedly not happy in those. And that's what I wore today.
So. Workout time. Salad time. And I have the added burden of doing all this furtively because all the experts say to never bitch about your body in front of young girls. I agree, but I think they'll probably be on to me soon enough. "Oh, mommy just loves lettuce!" "No, I'm too full for cake!" How long they think since when?
I guess I could go with "I'm trying to be healthy," which is true. That's right. Healthy. It has nothing to do with swimsuits. Nothing.
Any short-term goals you have set for yourself?
Posted by WendyCinNYC at 2:24 PM 13 comments:

East coast prep school/business school workaholic boy.
Midwestern public school/State U not-quite-so-serious girl.
It's a question my husband and I get asked a lot. I think what people really want to know is more along the lines of, "Why are you two together?" He's been serious about school, life, everything from the day he was born. Not so much me.
He would answer the question, "At work, where else?" but that's only half the story.
I met him semi-fresh out of college. My cousin gave me a job as a marketing assistant for his company that sold software to the plastics industry, which always reminded me of The Graduate. I was thankful for this job, as the pickings were slim back in 1993, and it took me from Missouri to sunny California, near L.A.
Only it wasn't so near. Ever heard of the Inland Empire? No? Let's just say there won't be any episodes of The Real Housewives of the Inland Empire anytime soon.
Soon I learned that a job in plastics just wasn't for me. For one, I didn't really understand how it all worked. There were computers, there were these huge machines, and something called resin. That's about all I can say. And I desperately wanted to move to the Big City, the City of Angels, where all dreams come true! Only...doing what? I hadn't exactly torn up the marketing world with my plastics experience. Advertising was cool, maybe I'd give that a shot. But I needed to pay the bills like, now. So, I decided (temporarily!) to temp.
And that's how I met my husband. I was his temporary secretary while someone was out on maternity leave. I was undoubtedly the WORST secretary in the history of office work. Seriously, I wouldn't wish me on anyone. For starters, I couldn't type. Oh sure, I'm fast now, but then? Pbbbtt, forget about it. I don't know why the temp agency ever hired me. My poor boss (yes, him!) would go into my files after I left for the day and correct my many mistakes.
He was kind of shy, but still, I could tell he dug me. We flirted at the office, but I had to make the first move and ask him out. I told him my secret: that I wasn't really a secretary. I was a writer. Still working on that one.
Thank god I found a job in advertising and eventually left, because my future in office administration was bleak.
So how about you? How did you meet your SO? Or , if you don't have one, your best friend?
Posted by WendyCinNYC at 10:55 AM 17 comments:

I've been thinking a lot about India lately, what with recently finishing The White Tiger by Aravind Adiga and seeing Slumdog Millionaire over the weekend. Both of which were excellent, by the way.

In The White Tiger, Balram, the narrator, claws his way to success out of a poor rural village in India, aided by nothing but his charm and wits. He's not always the most admirable character--he murders his boss, for starters--but his spirit is irresistible. Both White Tiger and Slumdog show the decency in a world of acute corruption.

I read an interview with Vikas Swarup, the author of the novel on which Slumdog was based. One quote struck me as to the heart of why I'm in love with All Things Indian:

Wall Street Journal: Terrible things happen to these characters, but they never whine about it. Why?
Swarup: That's the spirit of India. People move on with their lives. Even the slums aren't places of hopelessness and despair. People are forced to live their lives there because of their temporary circumstances. But that is how they see it, as temporary. Constantly they are trying to get out of the slums. Nobody sits around and moans and groans.

His quote transported me to a cross country train trip I took from Delhi to Bihar, where I was to spend several weeks volunteering in a dirt poor village (literally--my hut was made of mud and I had a emaciated cow as a sometimes-roommate.) At station stops, chai-wallahs would pass tea or bananas through the windows for rupees and street children would board to sell whatever they possessed. Often men with what I assume was leprosy, as they were missing legs, would scoot themselves on board to sweep the floors for whatever change they could scrounge. It was depressing, for sure, and the distinct memory has stayed with me all this time. But I've always admired the tenacity--the sheer will to survive--of the people working the trains.
Posted by WendyCinNYC at 4:34 PM 10 comments:

These prompts have been circulating around (first with Janna, then with Melanie), so I thought I'd take a shot:

Outside my window... I can hear some construction dudes yelling at each other en Espanol.

I am thinking...about checking my inbox again.

I am thankful for... my husband, who has saint-like patience.

From the kitchen...green tea steeps in my mug.

I am wearing... jeans, leather boots, a flowy brown and ice blue sweater, and long beads.

I am creating... an outline for a middle grade novel.

I am going... to be running all over town this afternoon.

I am reading... The Graveyard Book by Neil Gaiman.

I am hoping... for good news about a revision.

Around the house... papers are scattered and I need to file them.

One of my favorite things... is taking my kids to a movie.

Plans for the weekend... parents are babysitting for Valentine's Day and we are going out.

How is your day?
Posted by WendyCinNYC at 7:27 AM 5 comments:

I've been such a crappy blogger this week, but it's all in the name of writing. I've been writing and rewriting and editing and chopping so much that I think I might have gone just a little bit (more) batty. I dumped that sucker off at the post office today and I swear I almost dove in the bin after it. No! It's not ready!
Okay, so now that my brain is mush and my anxiety has reached its peak level, I think I'll focus on the positive today. You should, too.
A Few of the Many* Hidden Talents of Wendy Cebula:
---I'm good at reading aloud. I read to my kids every night and to entertain myself I do so with drama and flair. But not over-the-top drama, or the girls start to get snippy. ("Mom, stop with the voices.") I've honed this skill to a fine sheen over the years. Right now we are reading Nail Gaiman, which gives me ample opportunities.
---I'm good with directions. I can find a car in any parking lot and can trace my steps backward with stunning accuracy. I think I was a homing pigeon in a former life.
---I'm good at maintaining friendships. The "plays well with others" box was always checked "excellent" on my report cards. I may have grown a little bitchier overall through the years, but I'm still a good friend.
I do wish I was better at things like hair braiding (terrible mess) and artsy-craftsy projects (forget about it), but I'll survive. Notice that I didn't list "writing" up there in my talents. That's because, although I have days where I'm certain that's true, I'm having a you-must-be-delusional day at the moment. It will pass.
I hope.
Tell me about your hidden talents.
*"many" meaning, well, not so many.
Posted by WendyCinNYC at 9:13 AM 12 comments: 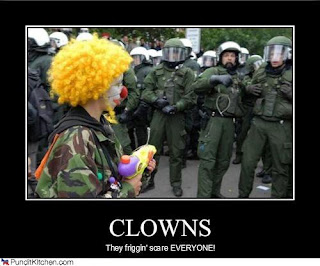 It used to be that almost* nothing scared me. Ghosts? Naw. Freddie Kruger? Oh, please. Jumping from airplanes? No problem. That creepy little girl from The Ring? Bring it. Not even clowns scare me, and, as it says above: they friggin' scare everyone.
After reading Coraline by Neil Gaiman, my kids are a little freaked out by buttons. But only if they are serving as eyes. Ew. That IS kinda creepy. Can't wait for the movie.
Now that I have kids, I feel like everything makes me nervous, when they are around. Cars. Bad guys. Water. Sharp things. Falling. Illnesses. Fish that bite. I've morphed into the the Be Careful Woman.
It makes me crazy!
What scares you?

*Sharks. I've always been afraid of sharks. Not unreasonable, I think.
Posted by WendyCinNYC at 1:17 PM 10 comments:

I've been working on requested revisions from an agent this past week that I hope very much will float her boat. Even if they don't, I think this revision makes my manuscript so much more focused. Revisiting it can't be a bad thing. (And yes, I'm keeping an original version on file, just in case it is.)
Often amidst all the cutting and slashing and rewriting, I hit a creative snag -- when that happens, I take a walk around the neighborhood. Creature of habit that I am, it's generally on the same circuit. Join me, won't you? 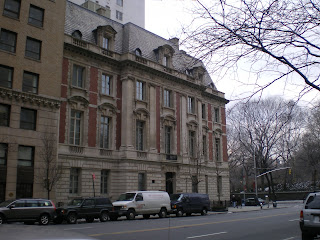 Despite the Neue Gallery standing steps from my apartment, I've never actually seen the collection. Pathetic, right? Philistine. Nice restaurant inside, though. I'm all about eating. 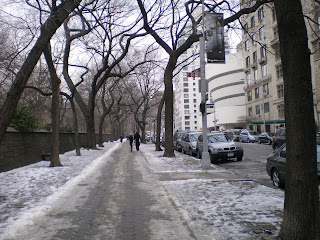 That spiral building there on the right is the Guggenheim, who, aging socialite she is, just got a brand-new facelift. She also has a decent place for lunch. 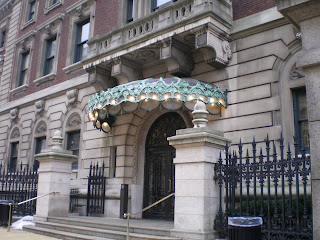 I love the entrance to this building. They have a gorgeous garden in the back, but right now it's filled with ugly construction equipment and wasn't worth taking a photo.
When I tell people I live in NYC, I think most picture a crazy-busy Times Square neighborhood. There isn't anything noteworthy about these pictures except that, hey, not so many people, right?
Tell me about your neighborhood. Or about how you deal with creative snags. Your choice.
Posted by WendyCinNYC at 12:42 PM 16 comments: