Once again, I plan to give books to everyone on my Christmas list. Lots of rectangular-shaped packages shall sit under the tree. What can it be? Why, it's a book!
I did the same thing last year and hey! turns out a book is kind of a personal item, and choosing the right one isn't so easy. Mistakes were made, let's just say.
Wouldn't it be great if Barnes & Noble had a matchmaking service for book gifts? Like an eHarmony device? That way, you won't accidently send Chuck Palahniuk's latest novel to your Aunt Sophia who lives in a convent.
Until then, you'll just have to settle for my low-tech version and hope you have a few characters like these in your family.
For the Stylish Big Sister Who Watches HBO's True Blood and Wears Sexy Shoes:
Tempest Rising by Nicole Peeler
Soulless by Gail Carriger
...and her teenage Twihard daughter:
The Evernight Series by Claudia Gray
Vampire Academy by Richelle Mead
Twenty Boy Summer by Sarah Ockler
For the Uncle Who Volunteers at the Humane Society:
The Art of Racing in the Rain by Garth Stein
The Story of Edgar Sawtelle by David Wroblewski
Merle's Door: Lessons from a Freethinking Dog by Ted Kerasote
For the Workaholic, BlackBerry-Loving Husband: (this one is real)
The Return of Depression Economics by Paul Krugman
The Myth of the Rational Market by Justin Fox
Outliers by Malcolm Gladwell
For the Peacenik Younger Brother Getting His MA at Berkeley:
Eating Animals by Jonathan Safran Foer
Living Off the Grid: A Simple Guide to Creating and Maintaining Energy, Water, Shelter, and More by Dave Black
The Fight for Peace: A History of Anti-War Movements in America by Ted Gottfried
A subscription to McSweeneys
For the History-Buff Sister-in-Law with the Heavy Damask Curtains in her Living Room:
Wolf Hall by Hilary Mantel
The Little Stranger by Sarah Waters
Katherine by Anya Seton
For the Neighbor You Never See Because She Has a Hellish Commute:
Audiobooks, of course. I'd listen to Stories by Garrison Keillor. Love him.*
For the Mom Who Won't Allow Anyone to Leave the Table Without Eating Seconds:
The Barefoot Contessa Cookbook by Ina Garten
Julie and Julia by Julie Powell
Mastering the Art of French Cooking by Julia Child (She's probably lost it by now. Get her another copy.)
For the Dad Who Whoops It Up Every Thursday Night with his Masonic Brethren:
The new Dan Brown, naturally!
In Pursuit of Honor by Vince Flynn
For the Hard-to-Buy-For, Ph.D.-Toting Mother-in-Law:
The Museum of Innocence by Orhan Pamuk
Say You're One of Them by Uwem Akpan
Olive Kitteridge by Elizabeth Strout
Too Much Happiness by Alice Munro
This Earth of Mankind by Pramoedya Ananta Toer
For the Southern Belle Cousin in a Book Club: (I have lots of these)
The Help by Kathryn Stockett
The Gurnsey Literary and Potato Peel Pie Society by Mary Ann Schaffer and Annie Barrows
Hotel on the Corner of Bitter and Sweet by Jamie Ford
Whistlin' Dixie in a Nor'easter by Lisa Patton
See? There's something for everyone! Even the Right-Leaning, Conservative Brother-in-Law:
The Reagan Diaries by Ronald Reagan
What would be on your Christmas/Hanukkah/Solstice/Whatever list?
*Uh, hmmm. Maybe not as much after reading this.
Posted by WendyCinNYC at 4:28 AM 9 comments:

Pumped up for the show

Can you get up in front of an audience and tell your story with no notes, no papers, just you and a microphone? My friend Jayne can, and she invited me to a fundraiser last week to celebrate just that. The Moth is an organization that hosts storytelling events all over the city (and beyond) featuring a nightly theme and five storytellers who share a ten-minute tale about their lives.
Watching the performers that night reminded me of my college weekend job at a comedy club. I worked as a bartender/waitress and often served drinks to the comedians gearing up in the green room. Even with the uber-confident performers, the vibe in the room (which wasn't green, by the way) skewed tense, and I was careful not to disturb whatever process they needed in preparation to go on stage. Some comedians became arrogant, even belligerent, pumping up their tough persona only to slip out of it like a dirty suit after they finished. Others withdrew in the green room, quiet and nervous, muttering punch lines to no one.
Whatever their behavior in the green room, I rooted for each one when the show began. Even the guy who grabbed my ass (and apologized later.) Okay, yes, I had some skin in their success as well -- more laughs = bigger tips. But I respected the people who could get up on the stage with nothing but a microphone and open themselves up like that.
The Moth doesn't allow stand-up comedy at their performances. Still, some performers kill and some bomb. And the prerequisites are the same: you, a microphone, and a pair of brass balls.
Rejection through email is bad enough. At least writers rarely deal with hecklers.
How about you? Could you get up and tell your story?
Posted by WendyCinNYC at 6:11 AM 8 comments:

Oh, you women and your little trifles!

You might have heard shouts of indignation emanating from your computer last week over the decidedly penis-heavy Publisher's Weekly Best Books of 2009 list. I'll admit I haven't read the majority of books they chose. I love John Cheever and should probably pick up his biography. I'm sure the rest of those dudes are full of awesome. The last thing I want to do is diminish another author's work. I'm in no way saying they are undeserving.
But friend of the blog Moonrat posed a challenge for her readers: post your own list of 2009 favorites by female authors. As a reader and writer of women's fiction (no, not chick lit, you turkeys) how could I not participate?

THE HELP by Kathryn Stockett

THE ELEGANCE OF THE HEDGEHOG by Muriel Barbery

Okay, so THE HELP and HEDGEHOG were actually published at the end of 2008. But I haven't had the chance to read some of newly-published books like WOLF HALL and THE CHILDREN'S BOOK, and Alice Munro's new collection isn't even out yet, so I decided to make my sample Fall '08 - Fall '09. Cheating? Perhaps. But there you have it.

ETA: Check out this thought-provoking post on women and writing by Marie Mutsuki Mockett.

How about you? Any favorites from the ladyfolk (any genre will do)?

Just trying to avoid cutting off my own ear

I haven't been blogging as much as I would like this fall. It's true. This is primarily because every moment of my day has been filled with commitments, writing, or general angst. I just finished up a time-suck project (co-chairing a fundraiser at my kids' school--I know, I know, very PTA mom of me. Don't mock.) so now I'm free to blog away, provided I can think up topics.
I knew the fall would be crazy. I'd be dealing with/revising book 1 plus writing the first draft of book 2, in addition to my kid administration duties, which are plentiful. So when the school asked me to help spearhead a hugely labor intensive project, I took that on as well.
Prithee, tell, you might think, why bring this upon yourself? What are you trying to prove?
Actually, I'm no martyr, nor am I someone who has trouble saying no. I do, however, know how I can get when I'm writing. It can be summed up in two words: crazy hermit.
I can go for days without leaving the apartment. Weeks without wearing real pants. Months without calling friends. And sadly, I'm not even all that productive with my writing. There are days when everything that comes out of my fingertips just SUCKS SO BAD ARRRGH YOU THINK YOU CAN WRITE?! HA! GO EAT WORMS!
So yeah. Not really great for the mental health. Besides, it's true what they say, at least in my case: if you want something done well, give it to a busy person. It's all or nothing with me.
Balance. I haz none.
How about you? When are you most productive? I hope for your sake, you are nothing like me.
Posted by WendyCinNYC at 6:26 AM 6 comments:

Unless you live far, far away from these United States, you probably had more than a few kids at your door begging for candy on Saturday night. It's kind of a big deal.
So a few months ago, my daughter decided that the "Cone of Shame" used on the dogs in the movie UP was pretty hilarious, and she wanted to fashion her Halloween costume around it. We gathered all the makings of a humiliated dog and put them in the closet until the big day.
Saturday morning, it was time for a trial run. She dressed in her costume, ran to the mirror and...cried. Tears, sobbing, the whole deal. She just didn't have the confidence she needed to pull it off. It's a fear I know well. Looking stupid. Failure. If I'm trying to be funny in my speech, will I flop? If everyone knows I'm writing a book and then it never gets published, will I crumple up in a ball and die?
She searched through some safer costumes left over from years past. No one would laugh at a colonial girl or a knight, perhaps she should go with that? I told her that was fine with me. It takes guts for a 10-year-old to walk around in public looking completely uncool. She's also entered the age where everything is just sooo embarrassing ohmygod. If she was doing the funny costume thing, it would be a risk. She just had to be all, "Yeah, that's right! I look ridiculous. Ha!"
In the end, she decided to go for it: 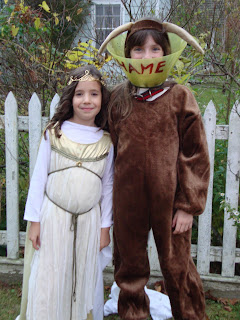 Thank Dog it was a hit.
How about you? Are you taking any risks lately?
Posted by WendyCinNYC at 9:04 AM 9 comments: