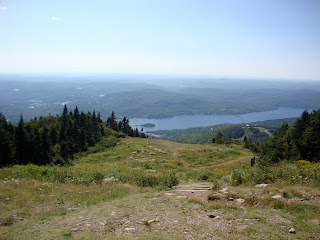 We took a trip last week to visit friends in Mont-Tremblant, Quebec, who were nice enough to host all four Cebulas for a few days. I, being not at all outdoorsy nor terribly athletic, decided it would be such the great idea to climb the mountain while were there. I even went out an bought new (cute!) hiking shoes.
"You sure?" said my very outdoorsy and athletic friend. "It's a pretty good climb."
Of course! Can't let a good shoe go to waste. 4 miles straight to the top? That's like walking from the Upper East Side to, what, Soho? Totally doable. Except, like, up.
But what the hell, I'd set the treadmill elevation to 10 before, and I didn't die. Surely I could do this. Plus, you know, the shoes! They were cute and sporty and made me feel official.
Standing at the base of the mountain, my friend pointed to a teeny tiny observation deck at the summit. It was like an ant house. "That's where we're going," she said. And...wow. That was a loooooong way up a steep incline.
"Don't worry," she said, heading up the trail, "there's only one part that's scary*, right at the top."
Well, blog friends, I did pretty well most of the way up. My husband and youngest daughter came, too, and we took it in small steps. I tried not to think about how far I had to go. Just up to that ridge, just across that little stream, we'll take a break at the rock. Much like when tackling a new novel. I'm a slow writer, and if I think too much about how many pages I have to go, forget about it. I freeze. Surely I don't have the chops to write 300 effing pages of story? I'm a short form person, not a novelist--that's too much work. Turns out I can if I just chug along.
And that's what I did. 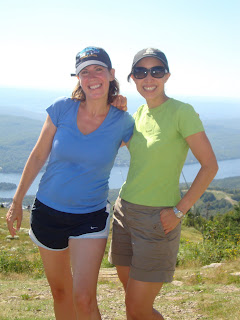 We made it!
So, how about you? Have you accomplished anything great or small lately?
*OMG. Scary. I almost cried!
Posted by WendyCinNYC at 2:30 PM 11 comments:

My daughters and I are reading the book SHABANU by Suzanne Fisher Staples. It's been around a while--about 10 years now. It's about an 11-year-old girl growing up in the Cholistan desert in Pakistan. I'm not sure why my daughter picked it out at the bookstore, but it couldn't have come at a better time.
I'm sure you've heard about a little neighborhood issue we are having here in Manhattan? Certainly lots of people have chimed in. I was pregnant with my second daughter on 9/11, and I'm not going to go into the whole experience of living through that day. I'll only say that it took many New Yorkers into a dark, dark place for a long time.
We read the newspaper every morning, and my 8-year-old always has strong opinions. I generally have to issue a mass apology to the other mothers in her class for some of the death-and-destruction stories she brings in. She seems to think it's her job to corrupt young minds. Yesterday, I was discussing the mosque issue with my dad and things got heated (with most of the heat coming from me, to be honest.) Later, in the car, my daughter and I had this conversation:
Daughter: But, why are people mad about the mosque?
Me: They think it's disrespectful to build it so close to where all those people died.
D: Like (redacted)'s dad?
M: Yes. Where he died.
D: Is (redacted) mad about the mosque?
M: I don't know. I'd rather you not ask her. It might get her upset. Okay?
D: Okay. (pause) But what does that have to do with a mosque?
M: Well, the men who hijacked the plane were Muslims, and Muslims worship at a mosque, and some people think it's wrong to worship there.
D: But they were bad guys.
M: Yes. And not all Muslims are bad guys. Most are living their lives, just like anyone else.
D: Like Mrs (redacted).
M: Uh huh. And grandpa's doctor you met last month. And daddy's friend from L.A. And Shabanu, from the book.
D: She's not real.
M: I know.
D: I still don't get why people are mad that they want to pray there. They didn't do anything wrong.
M: I don't know, honey. I don't agree with those people.
D: You don't agree with Grandpa.
M: I don't. But he still loves me.
I think I'll close this one for comments. No offense, regular blog readers.
ETA: Since posting, my dad has come around to my way of thinking, sort of. He still sees it as insensitive, but he does NOT agree with the other side's bullying, ugly, bigoted tactics to get them to move.
Posted by WendyCinNYC at 4:15 AM

Life has a strange habit of getting in the way

My dad hasn't been well lately, thus the long period of blog silence. It's tough to feel all lighthearted and writerly when you are shuffling around a hospital all day, prodding your very stubborn dad to do his therapy. (He's much better now, thank goodness, and out picking tomatoes in the garden.)
The post-op floor has a habit of stripping away all the non-essentials (Should I sign my daughter up for dance class? I'd really like to re-tile the deck.) Its inhabitants were forced to focus on what's important in life. Some families were joyous and others somber, but everyone there was facing mankind's greatest fear: death, and the avoidance thereof.
I can't stop thinking about the 33-year-old mother with 3 months to live and what her family must be going through.
Anyway. I didn't get much writing done, but perhaps the next project I tackle will be all the richer for it.
Jeez, that was a downer.
Posted by WendyCinNYC at 8:33 AM 10 comments: