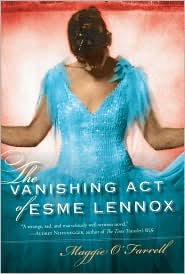 I love a novel with different points of view telling the same story, and I enjoyed reading The Vanishing Act of Esme Lennox by Maggie O’Farrell. It’s a quick read – only 240 pages – and beautifully crafted. Several passages I reread many times, just to savor them a while longer.

Esme and Kitty Lennox grew up Irish children living in colonial India. After the death of their little brother, the girls are deeply affected and the family returns to Edinburgh. There, they live with their authoritarian grandmother and attend a formal private school. Highly intelligent and somewhat rebellious, Esme has a difficult time fitting in with polite society. Nor does she care for what is expected of her: to conform, to behave, and, someday, to marry. But nothing else. After a traumatic event at a party, Esme confides to her sister that she sometimes experiences hallucinations. The family decides to have Esme committed.

Sixty-one years later, the hospital is being closed and Iris Lockhart, Esme’s only living relative, is called to take her in. When Esme learns that Kitty is alive and in a nursing home, she wants to visit her, and Iris learns of her family’s secrets.

Maggie O’Farrell weaves in several themes throughout her novel: secrets, feminism and the way psychiatry was used to control women who refused a conventional life. Iris finds old hospital records and reads of “refusals to speak, of unironed clothes, of arguments with neighbors, of hysteria, of unwashed dishes and unswept floors, of never wanting marital relations or wanting them too much or not enough or not in the right way or seeking them elsewhere. Of husbands at the ends of their tethers, of parents unable to understand the women their daughters have become, or fathers who insist, over and over again, that she used to be such a lovely little thing."

If you have read my short story "What She Needs," it's not astonishing to think that this kind of story would appeal to me.

It’s a gorgeous book. Check it out.
Posted by WendyCinNYC at 11:20 AM 1 comment: 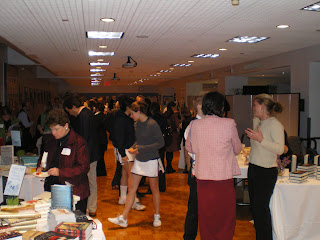 My daughters' school hosts an Authors' Night each year to kick off the Book Fair and they always have an interesting assortment of writers associated with the school. Anna Quindlen is a former parent, but sadly she wasn't there this year. Dangit. I love her books. I did, however, get a copy of All Souls by Christine Schutt (current teacher) signed as well as a copy of Changing You by Dr. Gail Saltz (fellow Class II parent). I hope to be in attendance there one day -- all of them sure seem to sell and sign a lot of books.
Other NBS writers (some at the event, some not):
Tina Brown
Dr. Susan Cohen-Nicole
Lisa Grunwald Adler
Mary Gardiner Jones
Peter Jennings
Joyce Slayton Mitchell
Janine Turner
Susan Nagel
Cecily von Ziegsar (Yes, the Gossip Girl author. And yes, it was based on her NBS experience. Don't get me started about how much this scares me.)

It's quite the accomplished crowd. My husband asked if he should tell people there that I write, too. Um, how about no?

Not yet, anyway.
Posted by WendyCinNYC at 6:02 PM 5 comments:

I suppose I should get the whole "welcome" thing out of the way. So, welcome. Ok.

I've been told that aspiring writers today absolutely, positively need a web presence, no matter how silly they feel posting their random ruminations for all to see. I promise to at least attempt to make the content of my blog interesting, the writing amusing, and the grammar error-free.

What this blog won't feature: my quotidian activities, e.g. Charlotte's team won the soccer game! Whoop-ti-do!, stories about my dog, things that annoy me (well, maybe sometimes, I can't help it). I also refuse to pull an Ayelet Waldman and write endlessly about my kids and motherhood. Yawn. Let's just get it out there. I adoreadoreadore my girls. They rock. But, really, who wants to read about what they are up to, aside from their grandparents?

I will blog about books, writing, and my quest for publication. Hows about that? Deal?
Posted by WendyCinNYC at 8:12 AM 4 comments: