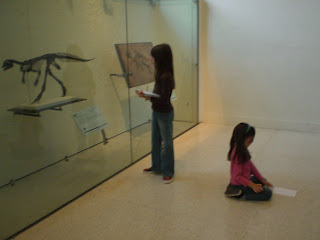 Yesterday, my family took a trip to the American Museum of Natural History for about the gabillionth time. On a rainy Sunday, this is not the brightest idea unless you enjoy being run down by strollers, but my kids love it and I frankly couldn't think of anything better to do. This time, to mix things up a bit, we took sketch pads and a camera for art projects. That's them up top, sketching the fossil of a somethingosaurus.
I'm not much of an artist (to say the least), but I tried as well. Mine didn't turn out so great. More like a stick dinosaur with a fat head. But I'd been writing several hours per day for the past week, so using my brain in a different way was a relief. We came home, printed out our pictures, and arranged a collage that looked like we'd all dropped acid.
Fun, though. And afterwards, I had a breakthrough with one of my scenes I'm re-re-writing.
What do you do to get your brain unstuck?
Posted by WendyCinNYC at 12:54 PM 11 comments:

Yesterday, I took a trip* to my favorite independent bookstore, BookHampton in Southampton, NY. (There are a lot of cutesy shop names like that out here--BikeHampton, PetHampton, ArtHampton. EnoughalreadywiththehamptonHampton.)
The thing that is simultaneously nice and frustrating about the Hampton villages is that the zoning laws prohibit most big box stores, so you won't see Home Depot, or Linens and Things, or even much by way of fast food (although there is a KMart tucked away in Bridgehampton.) It's lovely because the small town atmosphere is more or less preserved, except for August then all the city idiots are out. ...Oh hey, that's me.
Frustrating because it's not so easy to run out and buy things. But what it *does* mean is that BookHampton gets quite a bit of traffic, since there is no Borders and Amazon takes a few days to deliver. Luckily, BookHampton has a great selection. They even carry literary magazines, which makes me happy.
Still, I'm sure they are feeling the publishing downturn just like any other store. I noticed a promotion yesterday: bring in any 2008/09 hardcover and get $5 off a new book. I asked how it was going -- pretty well! They had a big stack of books. I assume they will donate those somewhere and get a tax write off. I thought that was a clever idea. They also have a "frequent buyer" card kind of like Starbucks used to do.
Anyway, maybe it was just some small thing, but I like to see these stores taking steps to boost business. I frequent a couple of other independent bookstores and I haven't seen much of an effort there. In fact, one of them *only* carries full-price hardcovers, much to my annoyance. Even for children's books. I mean, I get it, they only have so much space and they want to make as much money as they can. But still. I'm kinda cheap.
Tell me about your favorite bookstore? Do you buy most of your books there?
*Yes, my children are STILL on spring vacation. Oh Monday, will you ever come?
Posted by WendyCinNYC at 12:42 PM 10 comments: 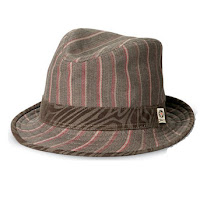 Seriously, I must have seen at least 40 girls in Los Angeles wearing these hats last week. Some were straw, some felt, and one particularly ugly hat was bright red with a cobalt trim. A woman two rows away wore hers during the entire 5 hour flight. Fedoras! They LOVE them!
We have our own questionable fashion trends in Manhattan, too, so I guess I shouldn't poke fun. Most notably: 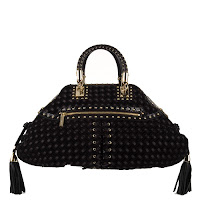 --Huge, huge, HUGE handbags (although one could probably fit at least 20 severed hands in there) with so much metal hardware it weighs 40 pounds. Buckles and jangles and studs, oh my.
--The leggings-as-pants look. 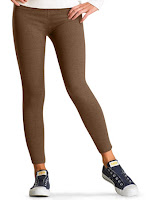 Just...no.
--And I'm guilty of this one myself--the used shopping bag to carry around all your crap, as if you happened to purchase something from Chanel just minutes ago.

I can't help it. It's too convenient to carry it and ditch the bag when you no longer need the contents. I won't stop! You can't make me!
How about your town? Any particular trends you've noticed?
Posted by WendyCinNYC at 1:12 PM 13 comments: 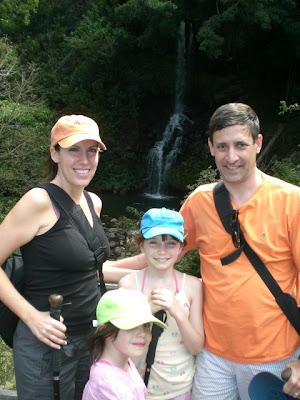 Who doesn't like to look at photo after photo of someone else's vacation? Besides everyone, that is. But I'm back in the mainland, so I thought I'd post my obligatory Big Island of Hawai'i shots: 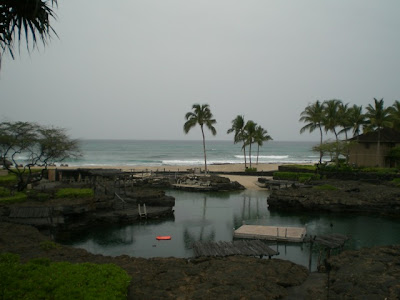 Here's the view from our hotel room, which was wonderful until I heard about the tsunami watch. Um, yeah. Kinda close to the ocean there. 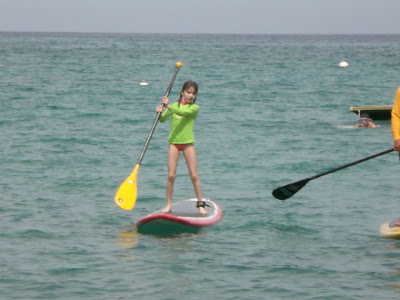 My daughter really wanted to go surfing, but alas, no waves. Stand up paddleboarding had to do. And she got to see dolphins out there along with humpback whales. 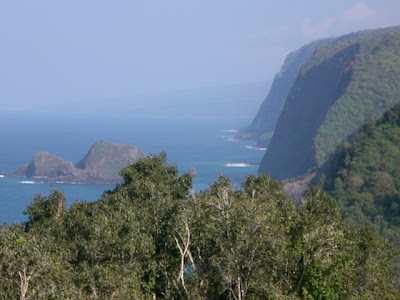 We went hiking up here and took a dip in a (freezing) waterfall. I'm not posting my swimsuit shots. At the bottom of that valley is where we went... 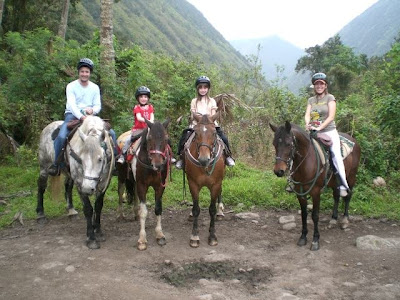 ...riding.  How embarrassing is it that my daughter had a bigger and faster horse than the one I rode. Mine didn't seem to get along with the other horses. She was probably pissed off she had to carry a full grown woman instead of a kid. 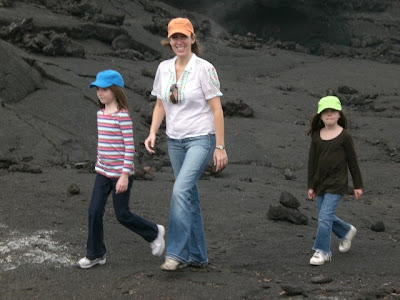 Changing gears here, but we went on a five-mile hike through the crater of a volcano, which was *really* cool. You can't see the scope here, but this sucker was big. I'm shocked my little one made it all the way without complaining. Well, much. I fell shortly after this picture was taken and cut my hand on the lava. Of course, I was facing backward, telling my kids to be careful and watch their step.
So that's it. We also did some rock climbing and the girls played tennis. Oh, and we stopped over in Los Angeles to see some old friends, drive by the old house, and visit Universal Studios.
Didya miss me?
Posted by WendyCinNYC at 2:09 PM 7 comments: 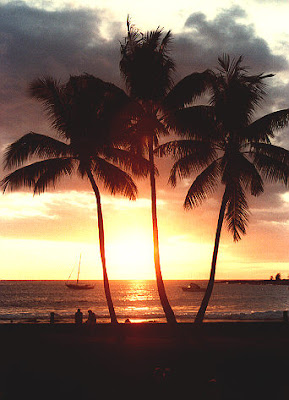 I'm off to the land of hula skirts and coconut bras tomorrow with a quick stop in Los Angeles to see some friends. I have to take my laptop with me anyway, so perhaps I'll do some blogging from there. But I guess that depends on how much fun I'm having.
Don't get in too much trouble while I'm gone.
Posted by WendyCinNYC at 4:56 AM 7 comments:

In case you haven't heard enough

Remember when I wrote my little ode to Springfield Cashew Chicken?  Well, yesterday the New York Times ran a long article about that very subject.*
Dammit, now my craving is back. I'll have to go load up on MSGs and hope that will suffice.
*It's possible this is interesting to no one but me.
Posted by WendyCinNYC at 6:59 AM 4 comments:

I did a "success story" interview over on QueryTracker, for anyone who is interested. I was hesitant about participating, partly because I don't like to take myself too seriously. Have you noticed? I strove for semi-serious answers because I thought if I was too jokey I'd come off sounding like a jackass.
I also hesitated because I think it's a bit premature to call myself a "success" by any stretch of the imagination. Yes, I snagged an agent, but that's just another of many hurdles to jump. I'll save the big party for when I get published (no matter how long that takes.) Then party I will!
But I did enjoy reading those stories when I was querying--hearing about other people's successes kept me plugging along.
And thanks for all who responded to the Big Dreams post. Those were fun to read.  Dream on, dreamers!
Posted by WendyCinNYC at 7:06 AM 8 comments:

When I was a kid, I had all sorts of big dreams for my life as an adult: concert pianist, Olympic gymnast, oh yes, and zookeeper. I really wanted to be a zookeeper from about age 6 - 8. Wouldn't you rather be a veterinarian, honey? No thanks. Zoo. Keeper.
I've always loved writing and I have always written stories and poetry. My father constantly told me I'd be a writer. Yeah, whatever dad. Who would want to read my dumb stuff? But for a great long while, I wanted to be a journalist. A White House or war correspondent, specifically. I had a crush on Sam Donaldson, which, I know, is weird. Maybe it was the eyebrows. At 16, I was a news junkie. (Still am.) I took journalism classes, wrote for the high school paper, and joined the yearbook staff. I dreamed of going to J-school at Mizzou.
I ended up going to Mizzou, but went pre-med instead. Why did I forget about journalism? I don't even remember. I lost focus, I guess. Pre-med didn't go well. Organic chemistry challenged my already-shaky resolve to become a doctor, and I ended up an English major. It was so the right place for me. Talking about literature and taking creative writing classes? Perfect.
At 16, I would never have guessed I'd have a career in advertising and then leave it behind to become a stay at home mommy. Never in a billion years. I didn't even like kids! And as much as I hate to admit it, my dad was right all along. After all these twists and changes, I really am happiest when I write. And it just so happens that there are a few people who want to read my dumb stuff. Hopefully many more.
As for journalism, I still kind of have a thing for Christane Amanpour. Guess I'll have to be satisfied with that.
How about you? Are you living your dream, or did you find another?
Posted by WendyCinNYC at 7:38 AM 15 comments:

Kinda don't know what to do with myself now

Up until a few days ago, this was my routine:
--Get kids off to school
--Check QueryTracker stats
--Check Agent/Editor blogs, Publishers Weekly, and Absolute Write
--Check QueryTracker stats again (you know, because constantly checking statistics really makes an agent respond faster)
Sprinkle in "check inbox" about every five minutes.
Oh yes, and I'd write. Maybe.
Now that I have an agent, I still find myself checking my inbox and QueryTracker. Why? What can it possibly tell me? I don't know. I can't seem to get out of this routine. If I were in preschool, my parents would probably get a call saying that I don't "transition well." My kid didn't transition well. Maybe it's in the genes.
My resolve is to treat writing more like a job--to find a schedule and stick to it. And, as if reading my thoughts, Agent Rachelle Gardner posted some advice related to this just today.
Okay, I'm off to work on some new story ideas before I get my revisions back.
Posted by WendyCinNYC at 9:31 AM 10 comments: