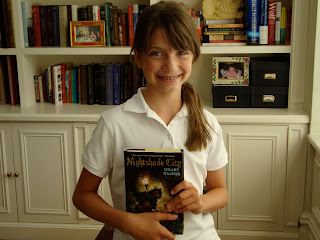 Hi! My name is Naomi and I'm hijacking my mom's blog to talk about NIGHTSHADE CITY by Hilary Wagner. My mom is friends with the author and got me an advance copy. So cool! But now anyone can buy it. Here's my review:

NIGHTSHADE CITY is a fast-paced and intriguing story about a once-peaceful, underground city of rats that are very intelligent. High Minister Killdeer and is loyal helper Billycan are murderers who command respect from all the other rats. But there are some rats that are starting to fight back.

Three young rats named Clover, Vincent (my dad’s name!), and Victor must team up with the rebels to bring every rat to the new Nightshade City and away from Killdeer forever.

I think the best thing about NIGHTSHADE CITY are the characters. You start out thinking of them only as rats but eventually they become like humans. NIGHTSHADE CITY has some adventurous themes like rebellion and redemption, plus some quieter, more unexpected themes like love.

If anyone says this is a book for only boys, they are wrong! Without the heroines in the book, nothing would be as fascinating or as exciting. NIGHTSHADE CITY truly is a good book!

Blog owner's note: tomorrow, stop by Dorothy's blog to visit the next stop on the tour.

Posted by WendyCinNYC at 4:08 AM

That's a great review! I like the way it's so short and to the point and gives me all the information I need to decide if I want to read the book. (I do!)

I wonder if my library will have it in?

Wait! I thought it wasn't out until October first? I'll have to check on that.

Great review! This was my first blog hijacking! Great job :)

Great review! And I love this book. :)

Very nice! I completely agree that the female characters are just as important to the story.

Great review for a great book!

Fantastic review Naomi! Reading is so fantastic and it's great that you liked the book. Great job!

Naomi! First off, you are gorgeous! I showed my 2 year old daughter, Nomi, your picture and she said you look like a princess and she loves that you almost have the same name! :)

Thanks so much for such a lovely review of my book! I'm so happy you liked it and I will be sending you a signed copy of the sequel next year and trust me, there is even more girl power in Book II!

Thanks so much Naomi and Wendy! This means so much to me and you made my week! :)

Great job! Now I'm curious. Did you imagine your dad's face on the rat named Vincent?

Great review and I love the picture with the book.

The themes are great and I agree, yay for strong heroines!

Fantastic job, Naomi. Your love of books is apparent because you are such a smart, observant girl. Mom is surely beaming with pride. I look forward to reading more of your reviews.

Awesome review! I now want to read that book.

Great review! I sooo want to read this! :D

Great review, Naomi. I see a bright future for you in the biz. As for the book, I've read it too and I'd agree with everything you said.

I think everyone who reads this smart, fun, exciting review will want to run right out and buy NIGHTSHADE CITY!

Terrific review! Very expressive, clear, and to the point. :)

Awesome review, and now I want to read the book!

She is adorable. The books Sounds great! Can't wait to read it.

Wow!! What an articulate young lady! Great review. I can't wait to read this one -- I have my copy but my to-read pile has gotten tall. I wish I was one of those speed readers! Instead, I enjoy pouring slowly through a book, absorbing all of its awesomeness. Soon...!

What a great review -- I was a little worried about reading a story about rats, but you convinced me when you said they eventually become like humans. I can't wait to add this to my "must read" list. :)

Thanks for the comments, everyone! Naomi read them all with a huge smile on her face.

Great review! I definitely plan on reading it!

Brilliant review! I'm going to have my son read this. He's had the book for weeks and hasn't picked it up. I think he will when he's read your review!

You need to hijack your Mum's blog more often.

I'll have to check it out!

Naomi, my mom teaches middle school and is always looking for good recommendations to read with her kids or stock in her classroom library. So keep posting!

Well done daughter, has she thought of starting her own blog?