Telling Those Men in My Head to Bite Me 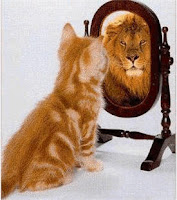 I’m not normally a person who lacks confidence. I mean, at all. It’s an unfortunate by-product of being an only child. We tend to believe we are much greater than what’s actually true. I have the opposite problem from most: my chutzpah gets me into situations that it turns out I can’t handle. Like the time I traveled to India by myself and nearly got into a fistfight with a soldier on an overnight train to Bihar. (Hey! He was trying to steal my bunk.)

But lately I’ve been nervous (ok, freaking out) about an upcoming Writer’s Conference I’m attending. When I sent off my writing sample, I was excited about the prospect of going to the workshops, attending the lectures, networking, all that stuff. One of my favorite novelists is teaching and it gives me a chance to stalk her all around campus.

Now all I can think about is being That Poor Woman Who Can’t Write For Shit. Am I going to be out of my league? Will I run crying from the room after harsh critiques? Go home! Losah!

Ok, maybe it won’t be that bad. But still.

Any words of wisdom? How do you deal with those voices in your head?
Posted by WendyCinNYC at 11:20 AM

I don't know whether to ask why you have men in your head instead of women or whether you're sexiest because of that. Since you want them to bite you, I'd assume the later, or... well, I won't go there...

Men, most assuredly. If they were women, they'd be complimenting my new summer handbag.

Sorry, no words of wisdom here. I too nervous to even sign up for one of those things. So you're a step ahead on that count.

You should be commended for signing up, Wendy! I hope you have a fantastic time.

Self-confidence is something I'm just now, in the last few years, getting ahold of - so I'm not one for giving advice. BUT, you have to believe in your talent (you've got scads of it!) and in those moments of self-deprecation and doubt... fake your confidence!

You'll do wonderfully and I can't wait to get the full report when you've returned!

Thanks for the vote of, er, confidence. You are sweet.

I plan on blogging a lot when I'm at the conference, so you can all watch ny nervous breakdown as it unfolds.

OMG been there done that. Do you not want to throttle that voice? I remember walking into rooms going "They'll know I'm a fake and I'm not a real writer, they are real writers and I won't be good enough". The irony is how many of those people were thinking the same thing.

Don't listen, your fabulous and free and a tulip among thorns.

Fabulous handbag, Dah-link. :-) You're a writer. You'll do great. You're going there to learn and network, just let everyone else. Enjoy it. Just don't drink 7 extra gin and tonics to calm the nerves during the afterhours festivities.

When those voices are in my head, they show up with The Face which, when the husband sees it, he immediately beats into submission with kind words and other ego-pumping stuff. :D He's great for that. :)

You'll do great! You've already signed up and can't back out (well, you could, but...) so go there and take what you can!

Stop worrying - you'll be fine. Absolutely fine. And you'll have the time of your life - as long as you let youself have it. So - go, have fun, and learn LOTS!!!

And, but the way - you're up next in the blog chain!